For 25 years the wheels have been rolling to keep hot meals on the tables of County seniors.

Through rain, heat waves, or blizzards, the volunteers drive Meals on Wheels to the homes of shut in seniors to help maintain their nutrition and prevent the serious illnesses that result from poor eating habits. 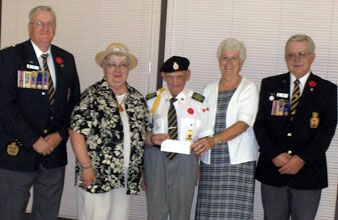 Upon accepting the cheque, Genny Vincent said "we are so grateful for the long standing support of the Picton Legion volunteers. They have delivered Meals on Wheels and supported the program financially for years. Words to express how we feel about their contribution don't come close to how much seniors have benefitted from their help."

The Prince Edward County Community Care for Seniors Association was established in 1977 and began delivering Meals on Wheels 3 years later. The agency is planning a special event to celebrate the milestone of having delivered meals for 25 years. Vincent said that "later this summer we'll announce a date in October when we'll hold a big party to thank everyone who has ever helped with the Meals on Wheels program."

Besides Meals on Wheels the agency offers other services such as transportation to medical appointments, noon-time dinners for seniors, foot care, help with forms, rural route reassurance and telephone reassurance programs. The agency is partly funded by the Ministry of Health & Long-Term Care and supported by donations and community fundraising efforts.