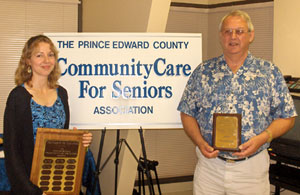 Debbie MacDonald Moynes, executive director commented that "we have many truly wonderful volunteers and each year we have the hard choice of choosing only one to receive this award."

Presenting the award was Angela Devries, co-ordinator of the Meals on Wheels program. She commented that "it has been inspiring for me to see the how people of this community support and help each other. With 500 plus volunteers working for Community Care throughout the year, it is possible for seniors to stay living in their own homes for longer.

This year's recipient immigrated from Holland with his family in 1947 and settled in the County. Even though his first teacher here, Mrs. Otto, insisted on him pronouncing his 'th' instead of 'da', John still loved the County. He is well known, with people remembering him as John the school bus driver, John the Elder, or as "Johnny from the Co-op", his very first job. Now he is John who brings them a meal once a week, or drives them to a doctor's appointment."

Retiring after 32 years of working in the maintenance department for the school board and driving a bus he has now traded in his bus for a minivan. Each week he can be found taking someone to a medical appointment in Kingston or for groceries in Picton. He delivers hot and frozen Meals on Wheels year round. John also helps at the Seniors' Dinners where he could be serving food one minute and plunging a clogged drain the next. Devries said "he does all this with great enthusiasm and a sense of humour."

Huizenga's wife helped keep the award a surprise. They are celebrating their 50th wedding anniversary this October and his wife was thanked for "sharing John with Community Care and seniors in the County".

Devries concluded her comments saying that "December 15, 2004 was a very lucky day for Community Care for Seniors and all the people we serve. It was the day John Huizenga came to our office to become a volunteer."

A plaque was presented to John Huizenga and his name will be inscribed on the large wall plaque that hangs proudly in the Community Care office.

Prince Edward Community Care for Seniors has been supporting seniors to live independently at home since 1977. New volunteers are always welcome. Services include Meals on Wheels, transportation to medical appointments, noon-time dinners for seniors, home help/ homemaking, foot care, help with forms, rural route reassurance and telephone reassurance programs. The agency is partly funded by the Ministry of Health & Long-Term Care and supported by donations and community fundraising efforts.

Maybe you are retired, or maybe you have a few hours of extra time... have you given some thought to participating in one of the many volunteer activities available through The Prince Edward County Community Care for Seniors Association?