The bowlers gathered to share their accomplishments at the first-ever banquet of the Wii Bowling League for Seniors. Bowler David Hawkins commented that there was "lots of good fun with much laughter, along with groans at spares missed and unwelcome splits." 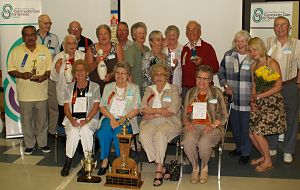 The Prince Edward County Community Care for Seniors Association launched this new initiative in the spring which saw 24 seniors sign up.  Bowling on the Wii, a video game system that is motion-sensitive, is so realistic that seniors feel like they are in a real bowling alley.

Speaking to those assembled at the banquet, Betty Shalka said "this Wii bowling is addictive. I'm new to Picton and needed to get involved and now I've become my funny self again.  The camaraderie is great."  Using a handheld remote control device, the bowlers swing their arm in the familiar bowling motion and watch the ball roll down the virtual alley on a large screen.  The sound of pins falling adds to the excitement.

The Pink Petticoats team took home the first place trophy and their team name is engraved on the large bowling trophy that is on display in the Community Care office.  Members of the team-Betty Shalka, Pearl Brown, Joan Lent, and Pat Leblanc-were all smiles as they accepted the take-home trophy.  One of the team members was overheard to say "I'll going to have it first because I'm having company this weekend and I want to show off!"

Debbie MacDonald Moynes, executive director says "Wii bowling helps seniors to be active, socialize and play a game in a safe environment.  No one is excluded because people can stand, lean or even sit to swing their arm.  This league has far exceeded our expectations and we're pleased to have been able to bring bowling back to Prince Edward County."

Prince Edward Community Care for Seniors has been supporting seniors to live independently at home since 1977.  Services include Meals on Wheels, transportation to medical appointments & shopping, noon-time dinners for seniors, help with forms, reassurance programs, homemaking, yard work and home maintenance.  The agency is partly funded by the Ministry of Health & Long-Term Care through the Local Health Integration Network and supported by donations and community fundraising efforts.