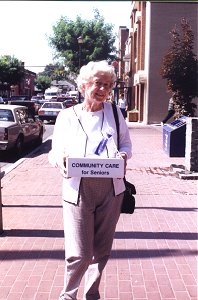 Approximately 70 volunteers scoured the streets of Prince Edward last week raising funds for the Association by selling "tags". Individuals who purchase a tag (for whatever amount they choose to donate) can then hang the tag from their shirt showing they've already purchased one so other volunteers selling the small pieces of paper won't approach them.

A total of $3,805 was raised last year during the fund-raising event but, as the Community Care for Seniors Executive Director Debbie Moynes pointed out, this figure cannot be compared to this year's event as only one tag day was held in 2001 and two took place last year.

In his remarks, board chair Howard Johnston, noted that "the board is very Joan Thissen, Coordinator for the volunteers selling tags in Picton, stated, "It's another fund-raiser. You do anything to help them raise funds for the program. There is very minimal cost involved in Tag Day. As far as money is involved there is hardly any cost."

Ralph Hall, a Community Care for Seniors board member, agreed with Thissen and added not only does the day help raise funds for the programs but it also provides exposure for the Association.

It's a really good way, Hall said, for the residents to learn about their programs as the volunteers selling tags also have pamphlets outlining the Association and their causes.

"There are always people out there that need help but aren't aware of us," Moynes noted.

Thissen stated this is completely true and added with a constant influx of retirees moving to Prince Edward county the more exposure the Association receives the better.