The Picton Branch of the Royal Canadian Legion has donated $1,000 to The Prince Edward County Community Care for Seniors Association in support of the Meals on Wheels program. Through this program, volunteers deliver a hot, noon-time meal to seniors throughout Prince Edward County. The service ensures that nutritious meals are delivered and also serves as a regular check on the situation of the senior. Volunteers from various groups in the County have been delivering meals since the inception of the program in 1980. Branch 78 of the Legion has provided such volunteers for 21 years.

Howard Johnston, chair of the board of Community Care says "our agency is only partially funded by the Ministry of Health. This donation will help us to continue providing meals on wheels as we strive to fulfill our mission to assist older adults to live in a home environment in reasonable independence." Mr. Johnston accepted the cheque for $1,000 from Donald Istead, chair of the Poppy Fund for the Legion in Picton. Also in attendance for the cheque presentation were Russ Burrows, service officer and Howard Markland, treasurer of the Poppy Fund. 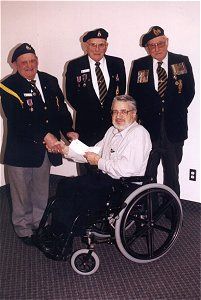 The Royal Canadian Legion remembrance programs commemorate the men and women who died in the military service of Canada during war and peace. Many believe that maintaining the tradition of remembrance is a sacred trust and the Legion's most important role. Royal Canadian Legion, Branch 78 in Picton and Legions across Canada commit thousands of volunteer hours each year to carry out remembrance activities.

The Poppy has been widely recognized as a symbol of remembrance, since it was first adopted in1921. By wearing the poppy, people demonstrate their gratitude to those who gave their lives for the freedom Canadians enjoy today. Each year, for two weeks before Remembrance Day, Legions throughout Ontario carry out a Poppy campaign. The campaign raises awareness of the Poppy as a symbol of Remembrance and the funds raised through the Poppy campaign are used to support worthy community endeavours.

The Prince Edward County Community Care for Seniors Association provides a range of services to seniors in the County. In addition to Meals on Wheels, services include transportation to medical and other appointments; Seniors' Dinners in various locations; foot care clinics in Picton and Wellington; completion of Income Tax; assistance with other forms. The office is located in The Armoury, 206 Main Street in Picton. Call 476-7493 for more information.