Open Navigation
Close Navigation
Our Organization
Back to News
A Lifetime Of Public Service: A Profile Of James Taylor

This year is the 40th anniversary of The Prince Edward County Community Care For Seniors Association. The organization will celebrate its long history of helping seniors live at home at a special event on October 12th, 2017 at Rotary Hall at the Prince Edward County Community Centre. As part of these celebrations, it is profiling some of the many people who have been instrumental in its development.

A LIFETIME OF PUBLIC SERVICE: A PROFILE OF JAMES TAYLOR, Former Ontario Minister of Community and Social Services, MPP for Prince Edward –Lennox, and past Mayor of Prince Edward County 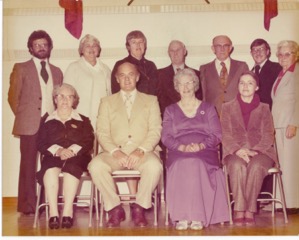 In 1975, James Taylor was a hard-working backbencher representing the riding of Prince Edward-Lennox in the Conservative government of Premier Bill Davis. He was surprised one day in 1975 when he received an invitation to meet with the Premier at a Toronto hotel.

“He wanted me to become the Minister of Community and Social Services,” recalls Taylor. “He said the cost of the ministry was about a billion dollars a year and rising by twenty percent annually. That’s a lot of money to spend. I thought “Well, that’s a nice introduction to a portfolio. Now what am I supposed to be doing?”

The portfolio was challenging. It was clear the Premier expected his newest cabinet minister to dramatically rein in costs without political fallout from citizens and the many organizations it funded. But as Taylor became more steeped in his new job, he changed his views and original strategy of drastic cuts to programs to become a strong advocate for community – based services.

“When I was first tagged by the Premier to take this on, I think he saw a tough, no -nonsense person who would just chop here, chop there and then we’ll get rid of him,” Taylor says with a laugh. “But the more I got into it, the more I liked it because I figured you could make a real, meaningful contribution… I think some of the other ministers were glad to see me moved to the energy portfolio because I knew the system and I am not a quitter.… Sometimes stubbornness is an asset…. I realized that these were real people you were dealing with and that’s very important.”

In reviewing programs to develop a new strategy, Taylor realized people were living longer and required more care, inflation would add to costs, and traditional family supports for seniors were changing. And within the complex world of federal -provincial politics, national programs initially funded by the federal government were often downloaded to provinces and municipalities. The most - cost effective model was to deliver programs through community – based, volunteer organizations. Taylor successfully fought for a 5.5% annual increase to the ministry’s budget to provide greater support for these agencies.

“Just the fact that they are there as someone you can call to address your problem is really, really important,” he says. “These volunteer organizations also raise money. They do a lot of fundraising. There’s lots of competition to raise funds these days. But they are doing a great job. They’re needed and they are appreciated.”

While minister, James Taylor funded a series of 27 pilot projects across the province aimed at delivering care for seniors through community organizations. One of the projects was in Prince Edward County, a community with a high proportion of seniors. The pilot project brought together nearly 20 local groups to share information, coordinate activities, to conduct a needs’ survey, and to be catalytic in developing affordable and sustainable programs. The 1977 project was the origin of The Prince Edward County Community Care for Seniors Association.

Taylor would go on to become the County’s first mayor when amalgamation took place in the 1990s. The experience only deepened his admiration for the organization he had originally funded as a provincial minister. Today he is also a recipient of some of the services like foot care that the organization provides.

“I’m very impressed,” he says. “They have very dedicated staff. They’ll do anything whether it is cleaning or providing transportation to appointments or just chatting with people. I think we’re very fortunate to have a strong, well-managed organization like that.”