Open Navigation
Close Navigation
Our Organization
Back to News
A Lifetime Of Educating: A Profile Of Margaret Werkhoven 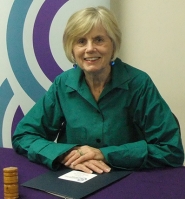 This year is the 40th anniversary of The Prince Edward County Community Care for Seniors Association. The organization will celebrate its long history of helping seniors live independently at home at a special event on October 12th, 2017 at Rotary Hall at the Prince Edward County Community Centre. As part of these celebrations, it is profiling some of the many people who have been instrumental in its development.

A Lifetime Of Educating: A Profile Of Margaret Werkhoven

Margaret Werkhoven was born in England as the daughter of a Canadian soldier and his English bride, and the family moved to Canada in 1946. She became a teacher specializing in English, Latin and history courses. She also taught her students about leading a happy and meaningful life.

“My focus,” she says, “was in helping young people to be the best that they can be, and to be the best citizens that they could be. I think the best way to be happy yourself is to put a lot of effort into making other people happy. There is all kinds of research that demonstrates that people live longer, healthier lives if they volunteer.”

Marg rose through the educational system to become a Vice-Principal and Superintendent of Schools for the Hastings and Prince Edward District School Board. After retiring in 1999, she used her longstanding commitment to volunteer service as a transition into retirement serving as a founding board member of the South East Local Integration Network, a provincial organization funding over 120 regional health services. It was her first opportunity to meet representatives from smaller organizations like The Prince Edward County Community Care for Seniors Association.

“I was impressed with the work they were doing because they were only a small health services provider,” she recalls. “The hospitals, community care access centres, and long-term care facilities are the big players and they tend to get most of the attention and money as well. I was really impressed by how much good work was being done by smaller organizations like Community Care For Seniors.”

She became a board member of the organization in 2010 and the President of the agency over the last four years.

“Our primary focus is to help seniors live independently at home for as long as they would like to be there,” Marg states. “So we spend a lot of time as a board focused on how we can both improve the services for seniors and help to identify other services that would be useful to them…. We have to raise 40% of our funding so there is also a fair bit of time spent thinking about how we can raise money. Our chief fundraising vehicle is The Thrift Shop and we’re always looking for volunteers to help us out there.”

Marg is also the Chair of The Police Services Board.

“Over the last couple of years we have focused on community safety and well-being,” she says. “We have identified that the most vulnerable populations in the community are young people and seniors so there is a lot of tie-in between the work of the two organizations…. It’s always been my theory that if you focus government services on the young and old, then the middle part will take care of itself. It’s the oldest and the youngest that need the support we can provide.”

She is also optimistic about the future of organizations heavily dependent upon older volunteers. While some are experiencing difficulties in attracting new people, she believes the current generation of “Boomers” will drive the need for governments to fund the health services they will require. And she has faith that the next generation will become active volunteers, something she has encouraged in her grandchildren, who both volunteer at the Thrift Shop.

Alexa, her 14 – year old granddaughter, enjoys the friendly, supportive atmosphere and is encouraging her friends to become involved.

“I think our generation gets a bad rap,” Alexa observes. “We’re nice people. Nice people raised us. We’re going to be nice people. I do think we will take up the volunteer work. I don’t think there is a huge concern about that.”

The examples of her grandchildren make Marg optimistic in face of the “grey tsunami” of aging volunteers now affecting many volunteer groups. And she continues to promote the many advantages of volunteerism.

“It’s been a productive time in my life,” she adds. “The more you are out there supporting your community, the better you’re going to be.”

To learn more about The Prince Edward County Community Care for Seniors Association and to register for its 40th anniversary special event on October 12, 2017, call 613-476-7493, visit their offices at 74A King St. in Picton or email: info@communitycareforseniors.org